Introduction
I see I made a post about unwinding skeins of fine threads exactly one year ago today, the day I am making this post. See it HERE.

There were a lot of comments responding to Tal Saarony’s previous two posts. It was mentioned that swifts work better mounted like a Ferris wheel rather than a merry go round. I remember hearing that from my mentor Helen Pope when I encountered my first umbrella swift. However, I probably didn’t remember it all the time.

In Japan fine silk threads were wound on this kind of spool. I bought some when I realized that the circumference is larger than a spool’s and that has made it easier to wind off skeins of fine threads.

It took a special winder for the spools.

Here is the skein holder that goes with the Japanese winder. Note it is positioned like a Ferris wheel, too. Another commenter said that the yarn coming off the skein should come off the bottom. I was told when you can’t find an end to pat the skein from the inside so the end could fall out and show itself.

I bought a cone winder with a skein holder attached from ETSY that came from Hong Kong. I haven’t tried it yet—too many other things to do before I go back to fine threads again.

I bought  this skein holder in Bhutan. Simple with straight sides unlike an umbrella swift. I think they all used the same size skeins in a workshop, but it wouldn’t be hard to exchange the bamboo sticks to change the size of the holder.

I bought this treasure years ago and finally sold it to an antique dealer.

This came along with the one above and went to the same dealer so someone else can enjoy it.

Tal lives in Belmont MA, a town adjacent to Cambridge. She graduated from the University of the Arts in Philadelphia and Cranbrook Academy of Art.

Hello genteel and/or uncouth followers of Peggy,
My name is Tal Saarony and I have been weaving for many years. I belong to the tribe of masochistic weavers who enjoy, while cursing like a sailor, battling with very fine yarn and, on occasion, inlaying patterns with several complicated treadling sequences, e.g., different overshots, into each row of weft. Not for me the simple life. These days I’m more of a plain weave kind of person, a balanced-weave tapestrier (in contrast with the weft-faced kind), but it still takes me hours to weave a full inch of cloth.

I will add some pictures of my weavings at the end of the post for your perusal.

I needed a way to store it so that I would be able to cut pieces off to use for inlay in my weavings. Normally I use bobbins for yarn storage, but I would have had to buy a large number, probably about a hundred, and I was hoping to avoid the expense. I don’t use regular-sized bobbins and shuttles — my shuttles and corresponding bobbins are very small. While, to my thinking, you can never have too many bobbins of any size, it seemed silly to buy a hundred bobbins just for yarn storage.

Here are bobbins and a cardboard spool I have. I normally use the middle bobbin.

I came up with the idea of a bobbin that would have very wide flanges that would allow me to store the yarn on. I thought I invented this ingenious idea and in my mind’s eye was seeing the pots of money it would be bringing in, but apparently such spools have already been invented. Probably two thousand years ago. But I didn’t know this, and enthusiastically made a wonky paper prototype.

Before embarking on mass production, I sent an email to Peggy — whose knowledge and deep understanding of all things weaving is unparalleled — and to another master weaver friend, Bhakti Ziek. Both warned me kindly but firmly of the dangers of collapsing flanges and the ensuing loss of yarn and sanity. Peggy explained it thus: “Big problems if the flanges aren’t VERY strong. They will pop off and make a mess as the spool fills. As a spool fills, more and more pressure is applied to the core of the spool, squeezing it dramatically. That is what can cause the ends to pop off. A lot of pressure is being applied to the flanges, too as more and more thread is wound on.”

Both Peggy and Bhakti alerted me to the existence of cardboard and plastic spools such that I desired. The dreams of pots of money evaporated in an instance. I would have liked the plastic spools, but, alas, finances dictated cardboard. The spools are available at Halcyon Yarn, and also at other yarn and weaving tool stores. I have been sternly warned that the flanges of the cardboard spools have been known to pop off when the spools fill up, with catastrophic results.

I have not had this problem. Although my spools don’t look very full, the yarn is extremely fine and, in my estimation, there are tens of thousands of yards on each of the spools. Some of the skeins took as long as half a day each to wind on an electric winder (admittedly with frequent breakage).

The current spools are reinforced with metal. Check for that when you buy.

And so I invested in 30 spools.

Here is a skein of silk yarn on a skein winder being wound onto a cardboard spool mounted on an electric bobbin winder with which I have a love-hate relationship. Please excuse the tissue that sneaked into the picture. I assure you it is snot-free.

Spools wound with my silk yarn.

The inside diameter of the spools is larger than my Leclerc bobbin winders. I have one electric and 2 manuals (and don’t get me started on how much I dislike them all. Are you listening Nilus Leclerc? Contact me for design tips on how to make your bobbin winders user-friendly, weaver-friendly, human-friendly). The electric one is at least 30 years old and the others older; I skeptically wonder if newer ones are made differently (why improve something inadequate if it has been selling for years). For the electric one, Bamboo skewers — not much thicker than a toothpick, but longer — and insert it along with the spool onto the winder. The skewer will be destroyed with each removal of a spool from the winder, so you will need a packet of them. It takes a bit of trial and error to get just the right length of skewer sticking out toward the body of the winder. Push the spool inward as far as you can but leave about a 1 mm space between the spool and the wooden base.

The skewer method works with manual winders too, but it makes an unholy racket; they’re, annoyingly, noisy enough already. I found that wrapping some masking tape (you will later have to scrub off the sticky residue, so there’s that to consider) around the shaft works better.

The photo shows the end of a skewer peeping out. Note that the spool is pushed almost all the way to the wooden base and pushed a little bit onto the thicker part of the shaft. In the background is the manual winder with masking tape that was shredded when I struggled to pull the spool off.

Peggy expressed concern that you, the reading weaver, might be dazzled by my paper spool and rush to make your very own. Do not! Should you attempt to use such homemade crappy specimen, you are sure to end up ensnarled in a tangle of yarn; tearing at your hair; clawing at your eyes; and muttering incoherently, until your loved ones are forced to ship you off to a suitable facility.

Happy winding, and do heed the warning re homemade spools…

Mosaic Photos
These are my most recent weavings. The pink ones are off the loom, but not cleaned up yet. The blue are still on the loom, the last two pictures are the same piece, still in progress. Click the first photo to see it larger and the details then use your arrow keys on your keyboard to navigate. 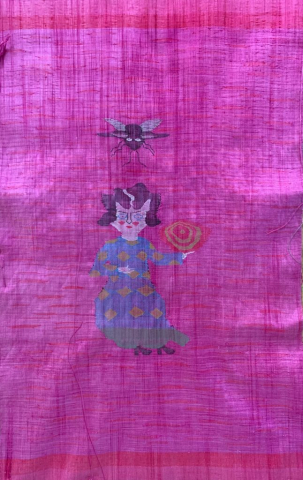 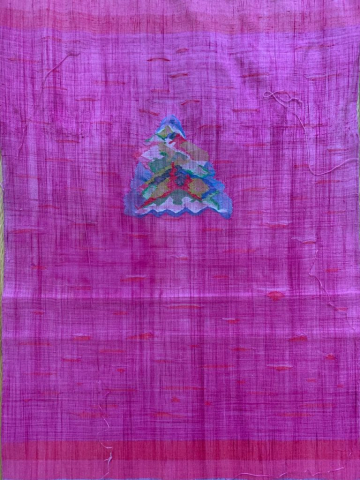 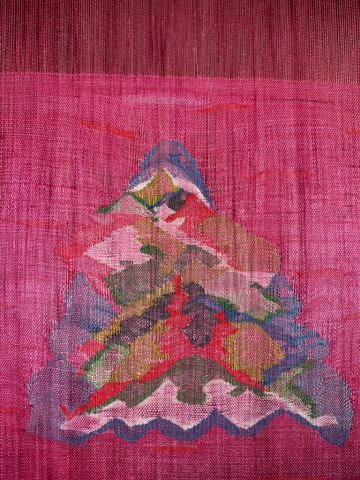 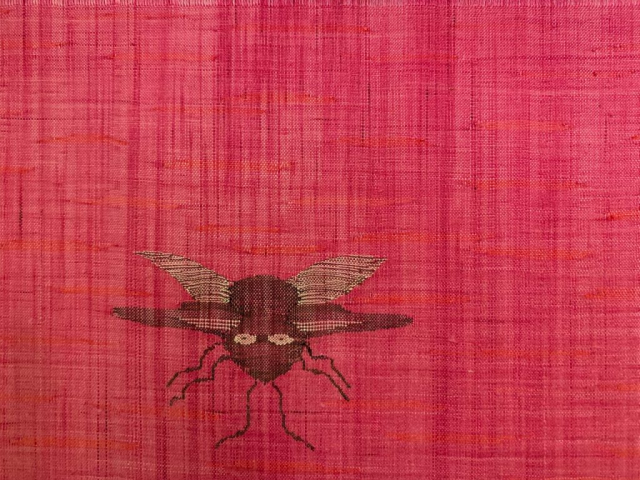 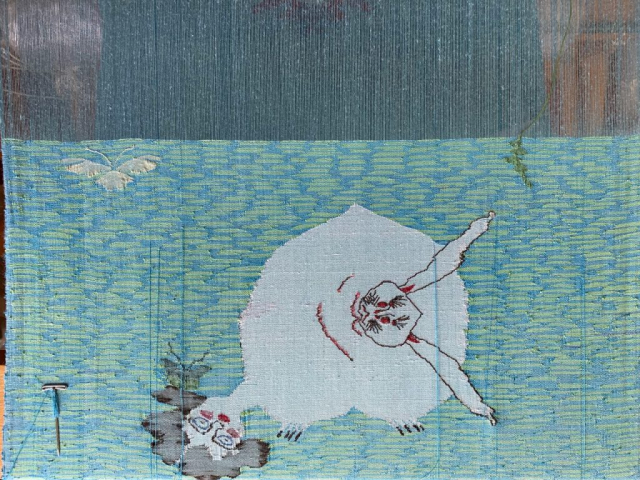 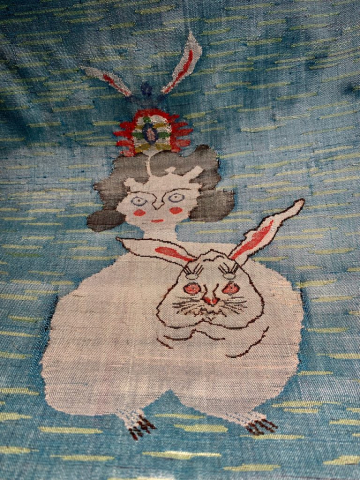 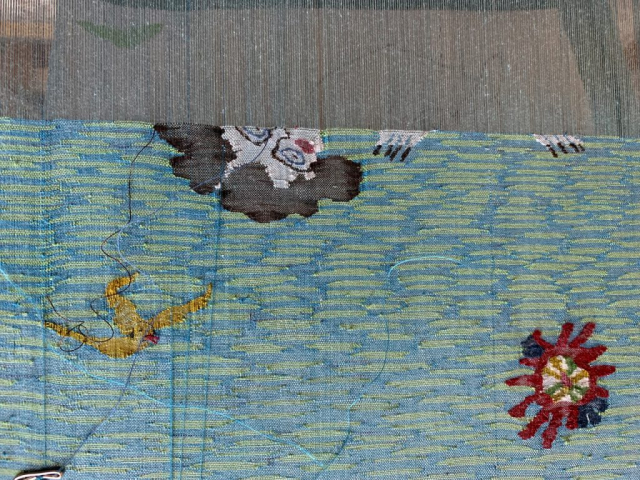