Introduction:
This is used when smooth yarns won’t hold with a regular weaver’s knot. Remember though, even this knot won’t hold very slippery yarns. Jim’s fisherman’s knot is for them. See “Warping Your Loom & Tying On New Warps” for the chapter on knots.

Note: The double can also be undone like the regular weaver’s knot.
Another Note: See my eBook, Weaver’s Knots on the website to order from Amazon.

The double weaver’s knot is a regular weaver’s knot with an additional step. One way to make it is to begin like the “ears” method.

As soon as you have the thread between the ears, go to the next illustration.

As soon as you have the thread between the ears, take it once around the right-hand ear as well.

Then do the same last steps: take the right-hand ear down under the thumb and…

Tighten by pulling on the right end.

The key to knowing you’ve tied the weaver’s knot correctly is to be able to release or undo it.

To undo it, you want to straighten out the thread that makes the “U” in the completed knot. No matter which way you tie it, there is one thread in a U-shape and the other thread winding itself around the first.

Pull on both ends of that “U” thread—in opposite directions—to unbend it and straighten it out.

The squiggly portion can be slipped right off, and even the squiggles relax so you have two fresh threads when you’re through.

Introduction:
The weaver’s knot’s characteristics—non-slip and a quick release—are valued not only by weavers but by climbers and sailors, too. The knot can be used whenever two cords are tied together or to fasten one cord to a loom part. Because it can’t be tied under tension, it is a good knot when measuring the warp when you have a slack thread to work with. It can be tied with short ends, but not with very slippery threads, such as silk. It’s slower to work than a square knot, but more secure and smaller. So, if a square knot doesn’t hold, try a weaver’s or double weaver’s. Even so, some threads aren’t compatible enough with each other or are too slippery to tie either a square or a weaver’s knot.

Check future posts for how to undo the knot and for the Double Weaver’s Knot!

This is the way Jim Ahrens taught and is in many books. The worker thread should be the longer of the two. If you are using this knot to tie on new warps, the worker thread is the new warp. In repairing a broken warp, the new thread (being longer) would be the worker and the existing end would be the non-worker.
Step 1. Cross the two tails, left over right, and hold the crossing part between the thumb and first finger of the left hand. The “ears” are the ends of the tails that should stand up straight. Make the ears long enough but not so long as they bend over.

Step 2. The right end is the worker thread. Take it around over the thumb and pass it behind the left-hand ear—just the left one—and bring it to the front between the two ears.

Drop the worker. Take the right-hand ear, bend it down into the circle, and place it under the thumb so it is pinched by the thumb along with the thread already under the thumb. The bent thread is actually bending on itself and held to itself in the pinch.

To tighten, continue holding the thread bent on itself in the pinch between the thumb and index finger of the left hand WHILE pulling on the remaining end with the right hand.

With warp threads likely to break at any place, you might need to tie a weaver’s knot with one end very short. Another time might be when tying on new warps if the old warp behind the heddles is very, very short. Here are the steps and a word of caution.

1. Make a slip knot in the long thread—that will be the worker thread.
2. Slip the loop over at least 3/8” of the short warp thread.

One word of caution from Vince Webers of Wilmington, Delaware: If you make the slip knot too tight to start with, this weaver’s knot won’t “upset” (capsize) in Step 3. He says you soon learn how much you should pull on the two threads. If you want to test this, try it with two ropes.

Introduction: I have been enjoying immensely preparing and sending out the frequent posts during the COVID 19 times. But I enjoy even more the comments and being connected to weavers who have responded.  The pandemic has connected us all—not only in the US but all over the world. That’s a lovely thing. The two comments below followed my previous post “Cutting off Some of the Cloth Before the Warp is Finished (the Two-Stick Heading)”. 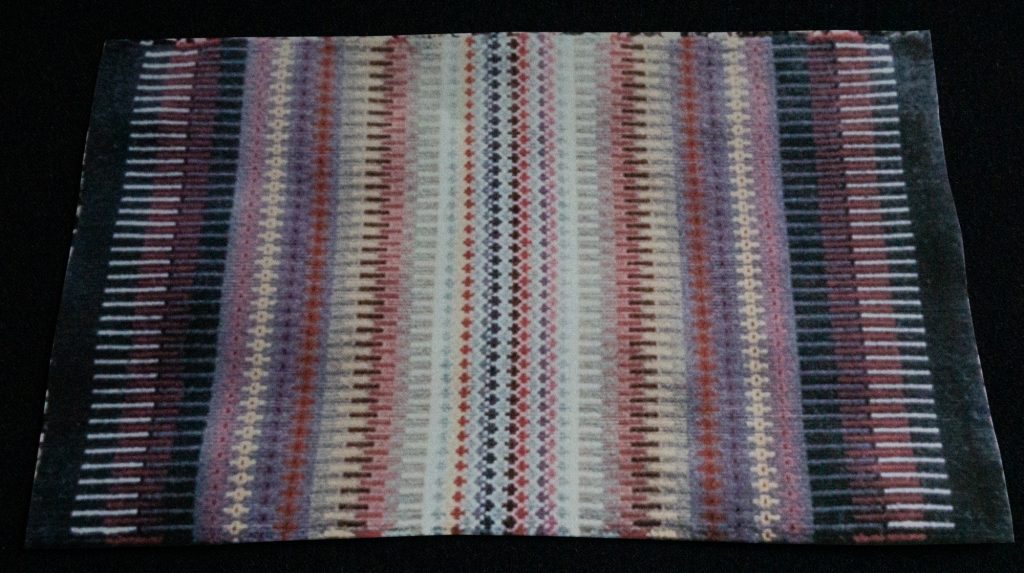 “Dear Peggy,
The timing of this post is perfect! I’m a fairly new weaver and just finishing the first of a pair of bedside rugs. I so wanted to take it off the loom but wary of wasting the linen warp. I now have a solution. Many thanks and Happy Easter from isolation on the other side of the pond.”—Ruth Morrell, South Devon, England 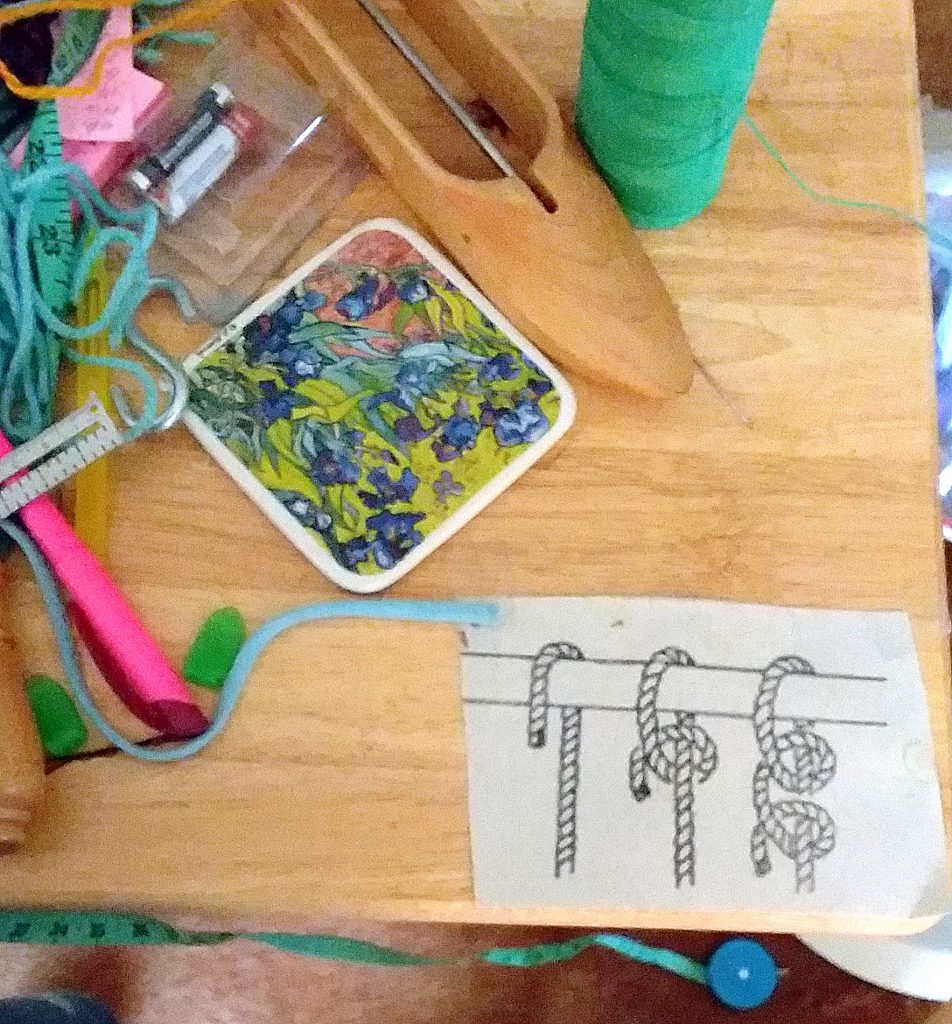 This comment from Linda Doggett from Dayton, Ohio, caught my attention. I know her name from her frequent posts on Facebook in the Four Shaft Weaving group:
“This wonderful tip has been printed and kept near my loom because I use it so often! I also have a printout of one of the knots from your book taped to the table next to the loom. You are pretty much indispensable, Peggy. 🙂”

I needed to hemstitch the other day and had to get out my big book, Weaving for Beginners, which was so big that it made it impossible to do the stitching. So I got out my Mini iPad and opened up my Kindle book on hemstitching. Perfect–then I taught myself again how to make the stitches. I was all thumbs at first but when I got it, it was quick and easy.

Then I got out my iPhone and it worked better than ever. What fun! I learned to hemstitch way late in my weaving life so on one piece I even forgot to use it.

So, I got it! Since this will be on the hem on the back of the piece, I didn’t need to be careful about having every group of threads the same size. The reason here is to keep the last wefts from unravelling. You should leave at least an inch of warp on the piece before cutting it off the loom.

You can get a copy of my Kindle Hemstitching booklet for just $2.99 HERE.
Next month I’ll publish my third booklet. This one will be about a unique way of “Tying On New Warps”. FYI: the second booklet is “Weaver’s Knots“.

My first Kindle book “Peggy’s Weaving Tips – Hemstitching” can be purchased HERE for $2.99.

This is so exciting!

You might use this method when tying on new warps if the old warp behind the heddles is very, very short.

Release, or undo the knot the same as with any weaver’s knot.

One word of caution from Vince Webers of Wilmington, Delaware: If you make the slip knot too tight to start with, this weaver’s knot won’t “upset”(capsize) in Step 3. He says you soon learn how much you should pull on the two threads. If you want to test this, try it with two ropes.