We had a free day in Chennai in southeast India at the end of our trip. We rode in another took-took to two fabric stores. One is where I bought my 21 different silks (a Meter each or so) and the other, for linens (only 7 different ones. On the way back to the hotel we saw something on the sidewalk and our driver said it was a woman ironing. Of course we stopped and I’ll never forget the “ironing lady”. I especially was interested in the hot coals in the iron!

She was working in this cart set up on the sidewalk. I assume the man was her husband.

Here is the view on the street that caused us to stop. In one photo I saw another woman ironing outside the cart-shanty. You can see the work done and what is waiting to be ironed on the table.

Here we are together. We were on a photography trip and had been told that the people were very friendly and willing to be photographed. By the end of the trip, we weren’t bashful about approaching anyone.

I thought it would be a good idea to show several Angavasthrams and to make sure you could see the length of them. And to emphasize the narrow width when they are all pleated and ironed. I have 7 and they are all gorgeous fine white cotton. Some have gold thread warp brocade for the outside fancy part and the red and black ones seem to have a red or black silk warp stripe with gold brocade.

Here you can see the outsides of them again. The middle one on the hanger measures a full 47 inches wide when opened out. It is 1 ½” wide when worn. I haven’t found anything about these narrow ones on the web so if anyone has any information, please send it in a comment or email me. Next time the subject will be: IRONING!

A year ago I went with my tech guy on a photography tour to SE India—an area called Tamil Nadu. Up until then I had only used point-and-shoot cameras on my travels. I had a lot to learn; it was for serious photographers. I was the only textile person; however, we did visit a silk weaving business that had jacquard looms weaving silk saris. I bought a simple one that is wonderfully iridescent.
One day we had free time and Bob and I hired a “took-took” to take us to a village to look in the antique shops—more like junk shops—so they were interesting. In a cabinet with a glass door, I saw what looked to me like a bunch of decorative tapes or ribbons. There was a lot of gold patterning on these very long things. I asked to see them and thought they would be great for my scrolls that I was going to make when I got home. There was a large, framed photograph showing how they used to be worn which interested me mildly. Bob did the bargaining, and I came home with 7 different ones.
When we got to the hotel, a woman told me that they were called angavasthram. I wrote down the word and that was it.
The owner of the little weaving factory knew more and said that they were special, and I could not cut them up. That was that.
At the hotel outside our room were a few old photographs of men wearing the angavasthram! We took pictures of the photos in their frames, so they aren’t very clear but enough to see how important men wore them. I haven’t found much on the internet, except that it seems that this was unique to this area of India and worn by Brahmin.

This is what I saw in the junk shop.

So, I did make a scroll after all. I discovered that the inside was as interesting as the outside.

This photo looked like a family photo with only the men wearing the anvagasthram.

Another family photo I presume. I wonder if the different arrangements mean anything other than “taste”.  I also wonder about the bands on the foreheads, shoulders, arms and chest.

Even this little boy gets to wear one. Notice that it is dragging on the floor in the back. 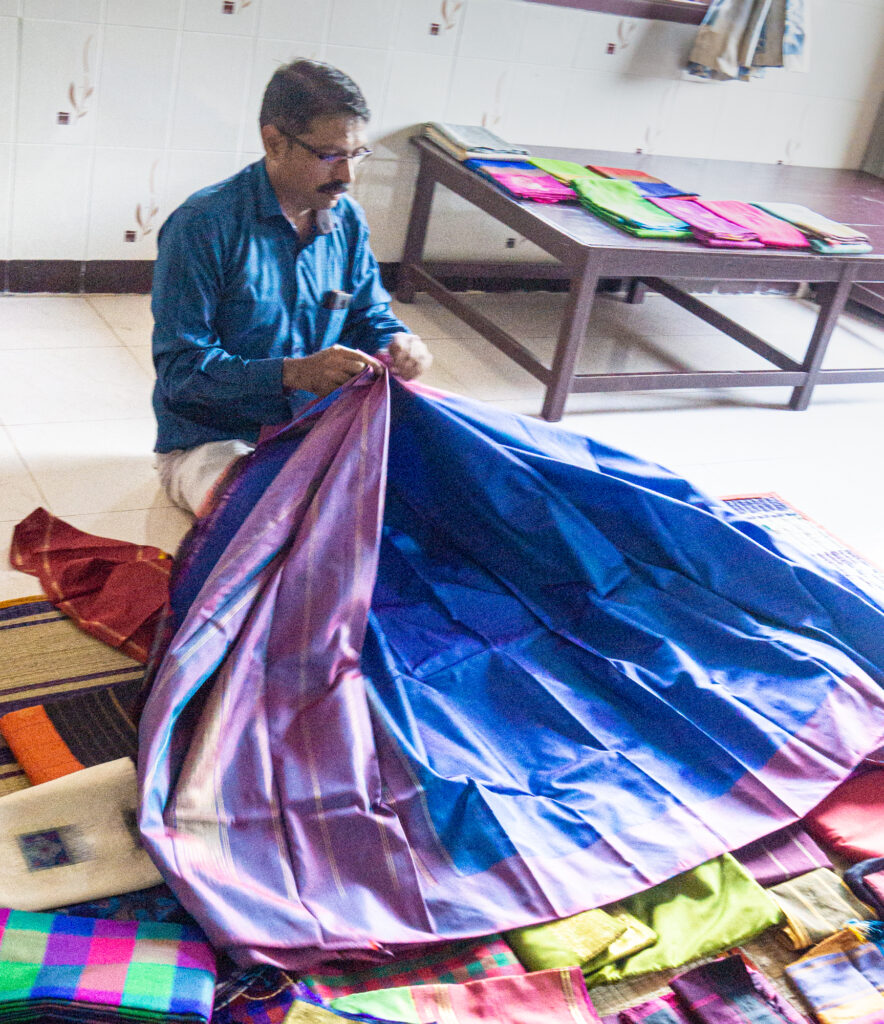 This gorgeous irridescent sari caught my eye immediately. I brought it home with me and hope to make collages where the light plays on the fabric in different ways. So inspiring! It would be lovely as a garment with gathers but I can’t think of anything I would wear. [click photos to enlarge] 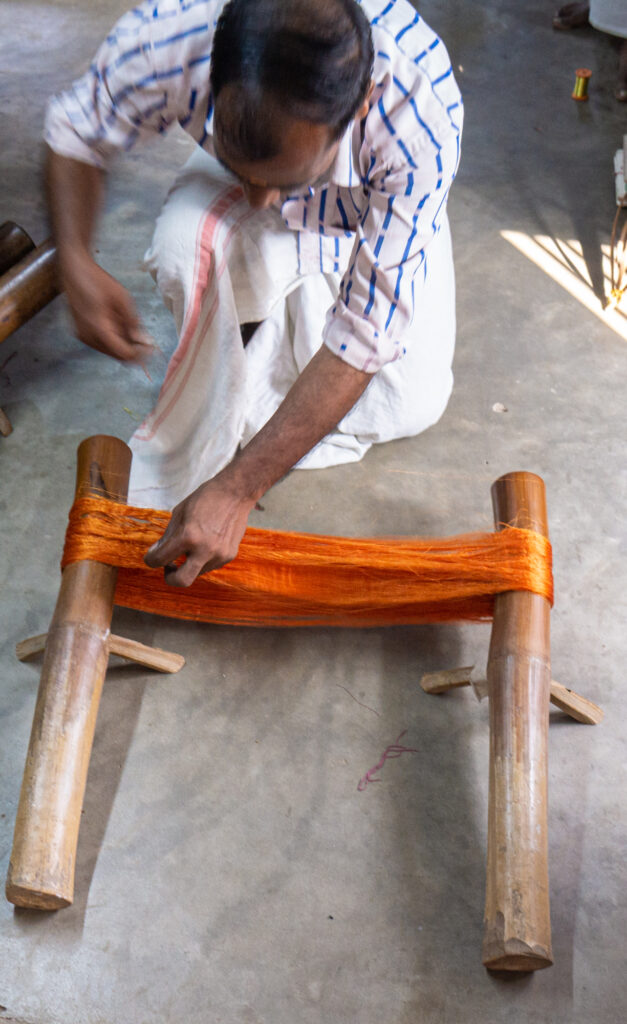 THIS IS A SKEIN HOLDER! I asked about the bamboo pieces with “feet” that were laying on the floor under a loom. Immediately a skein was produced to show the purpose. The threads came off beautifully. I would like to think it could be put up on a table. 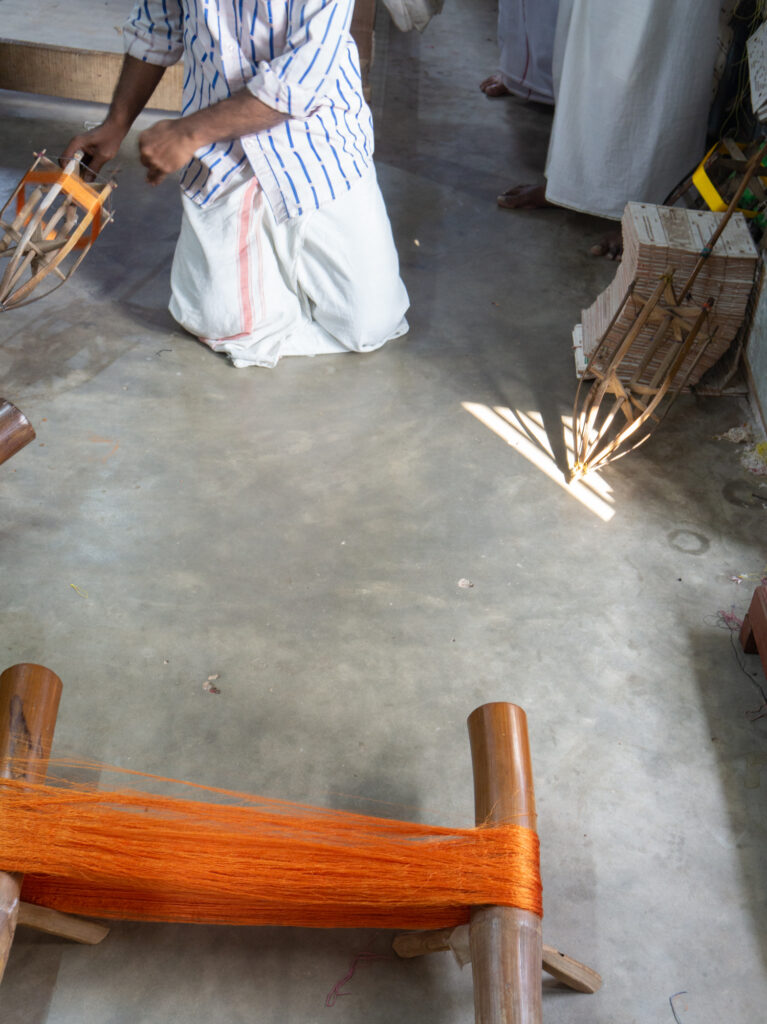 If you look closely in the corner of the photo the weaver is winding the thread from the skein on a wicker cage-like tool with a stick for a handle. He is winding very fast and the fine silk thread is coming off like magic.  I wish I could make skeins that well. 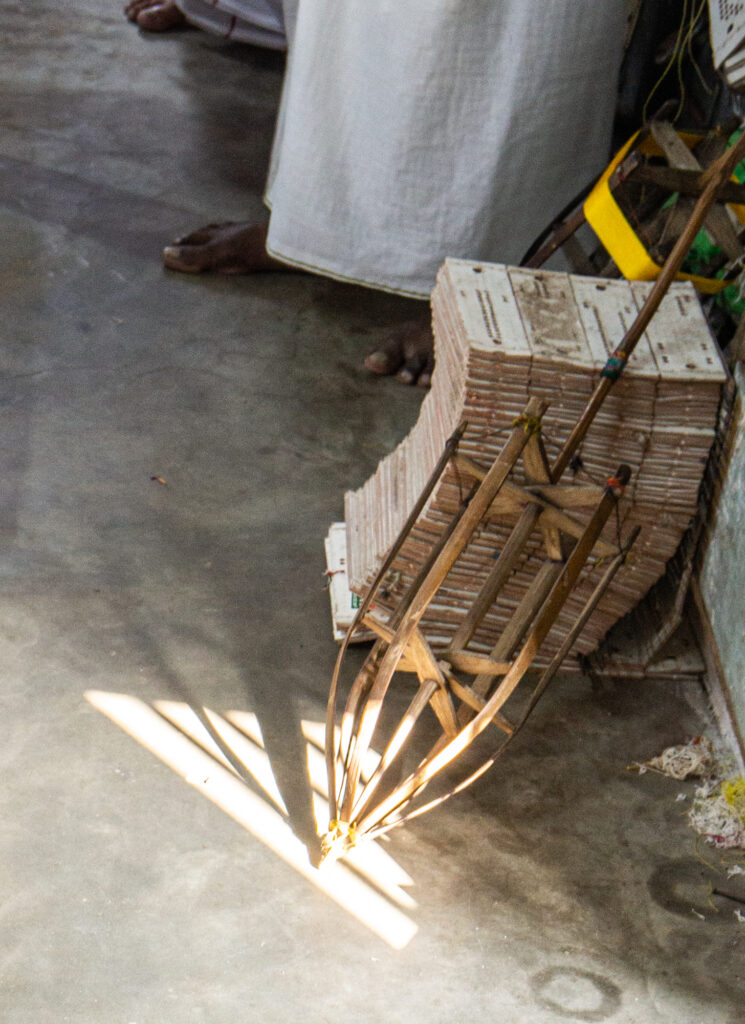 This close-up shows a stack of the cards for the Jacquard loom and the “cage thing” that threads are wound on. They could  twirl the cage fast and wind up the thread really fast. 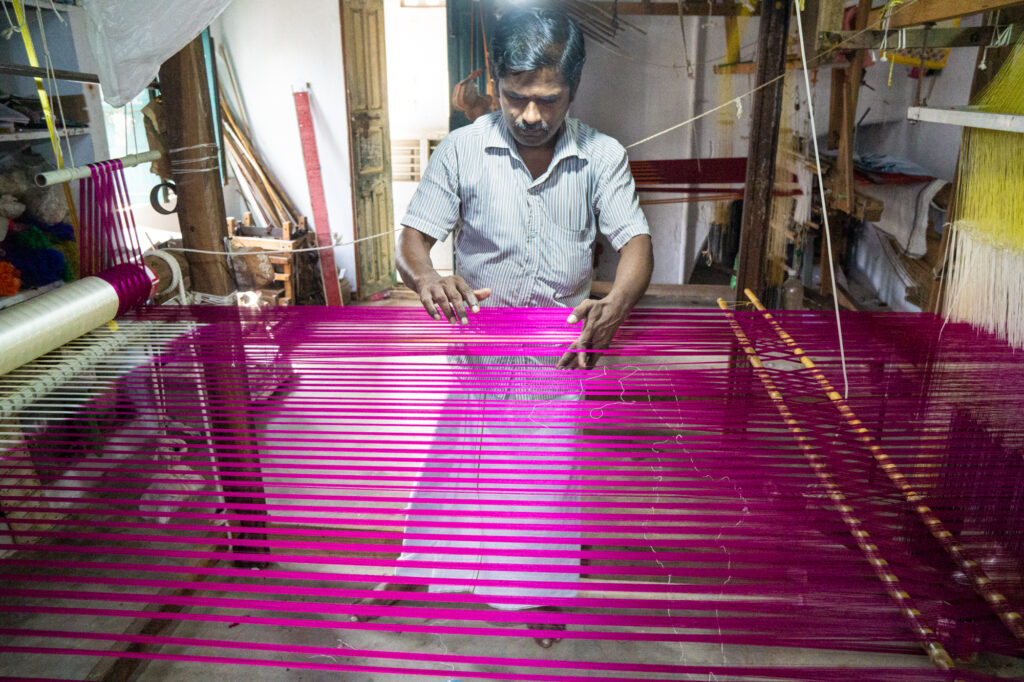 I watched this weaver for a good while while he was separating warp threads so he could move the lease sticks. I thought I was the only one who needed to fiddle to move the sticks sometimes. It’s VERY important to keep the sticks in. The reason is that if a thread breaks you will know exactly where it belongs. 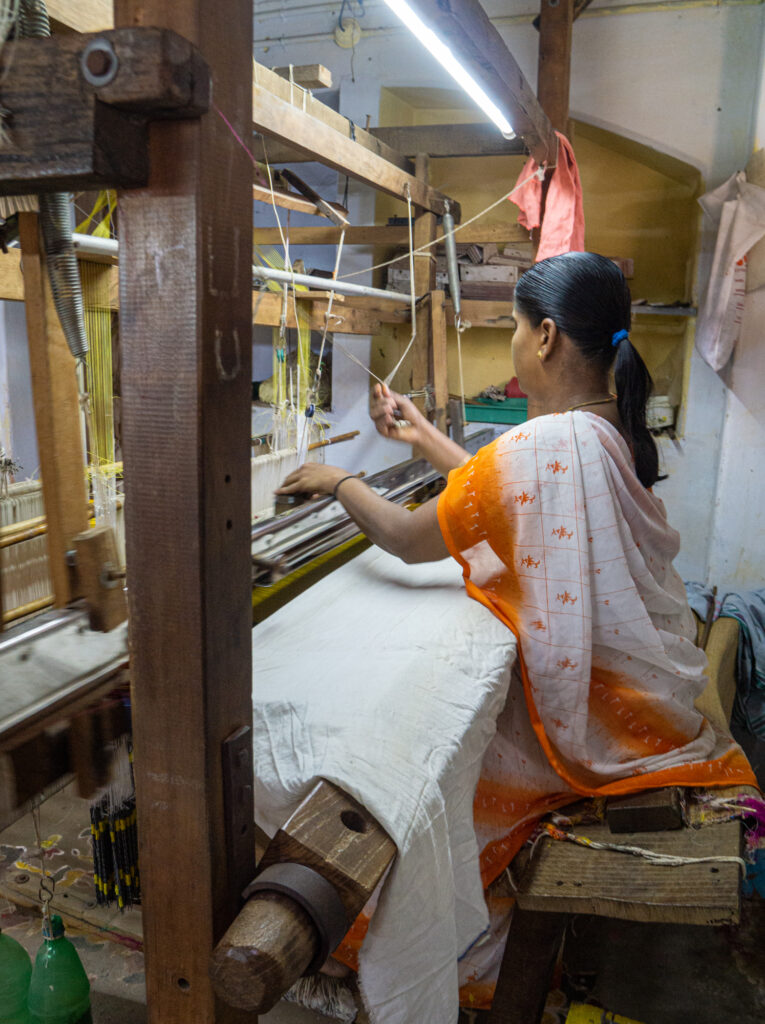 The woman in the sari is weaving along with a fly shuttle that works when she pulls the handle on the cord. (It shoots the shuttle across the warp.) I  visited a factory once in another part of India where all the Jacquard weavers were men because lifting all the threads with their weights took a lot of muscle. I was very surprised to see one woman. The others were men but not beefy types. 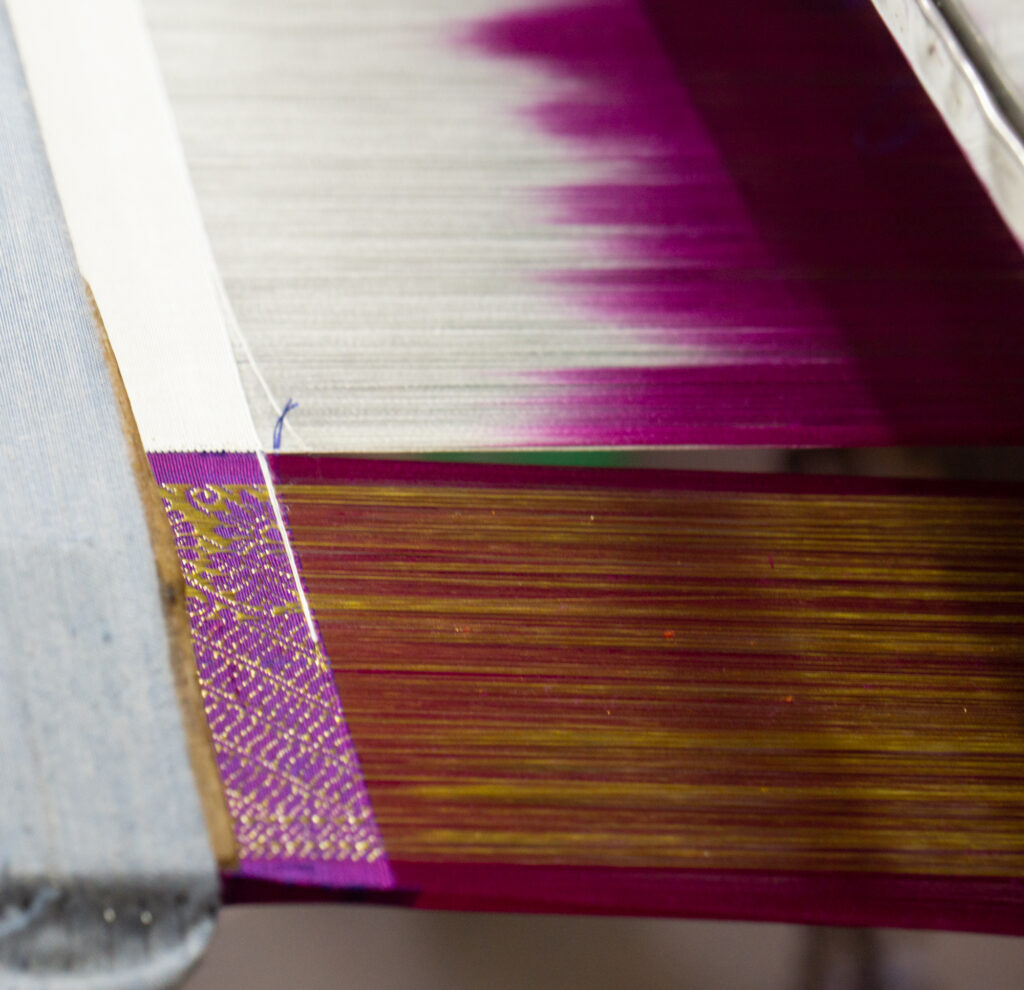 In the town of Thanjavur in southest India we visited Sri Sagunthalai Silks factory. One of their specialities is weaving special borders on the fabric. They developed a technique so the join between the body and the borders was barely detectable by feel. [click photos to enlarge] 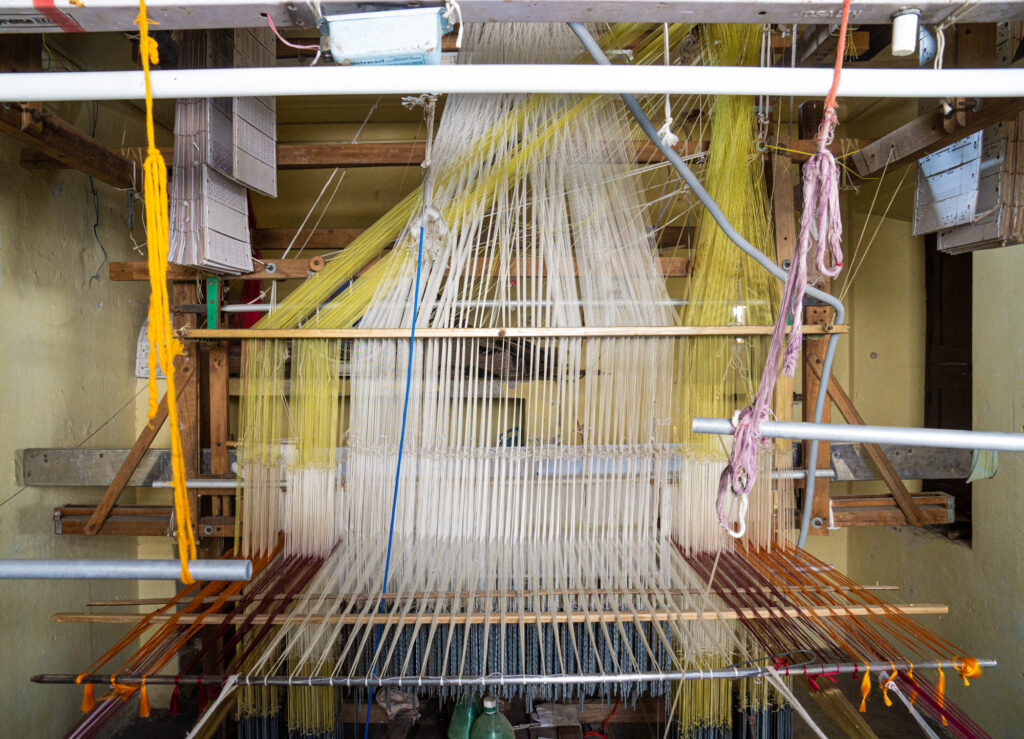 There were 5 or 6 Jacquard looms. Here is how the (two) Jacquard mechanisms were set up: one mechanism for the borders (with yellow cords) and the other for the body of the cloth with white cords. Each and every pattern warp thread was weighted separately so each thread could be lifted to make the complicated brocade pattern seen above. Each heddle was attached to its own cord going up to the mechanisms (yellow and white cords). One punch card was made for each row of weaving which the mechanisms operated to make the sheds. This inspired the develpment of computers; you can see why. 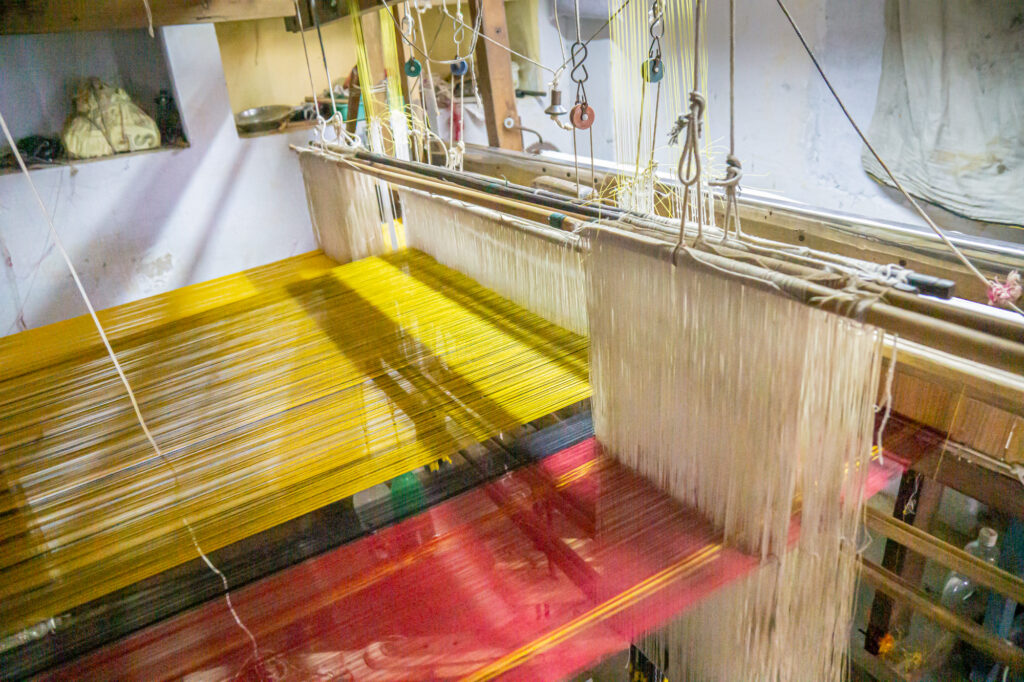 This shows the two warps for the body and a border. I think the shafts lifted the ground threads and the Jacquard lifted the separate pattern threads. 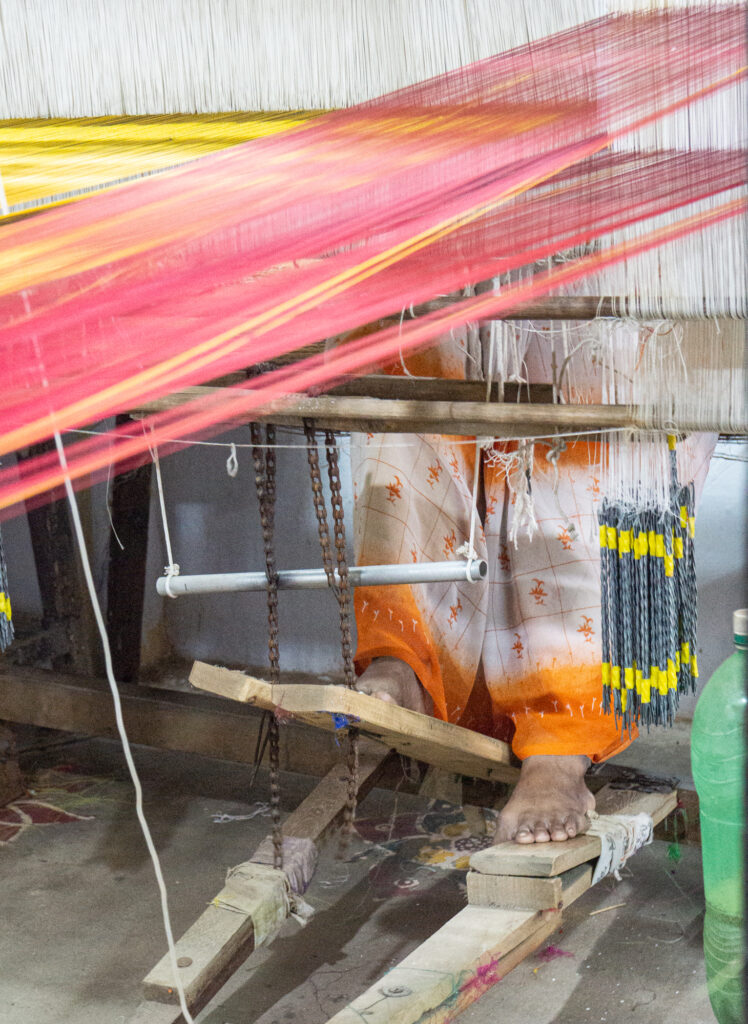 Here the woman weaving (wearing a sari) lifted the border threads with its own treadle. I think the Jacuard worked automatically when a shed was made. (You can see some of the weights below the border). 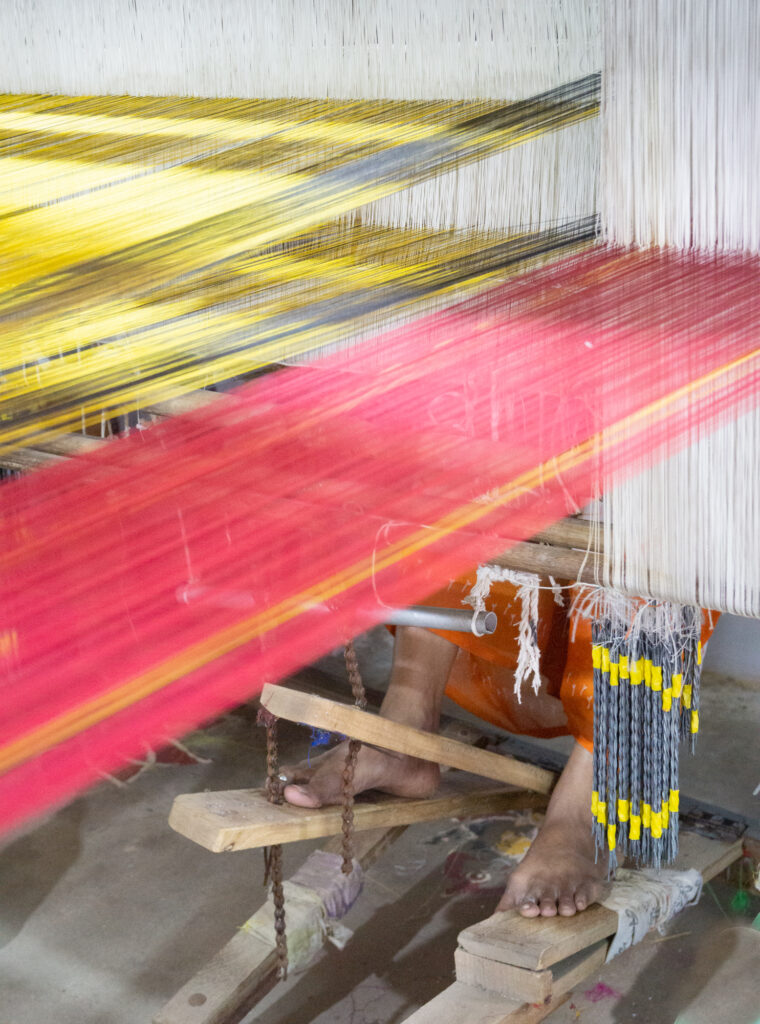 Another treadle worked the shed for the body of the fabic. 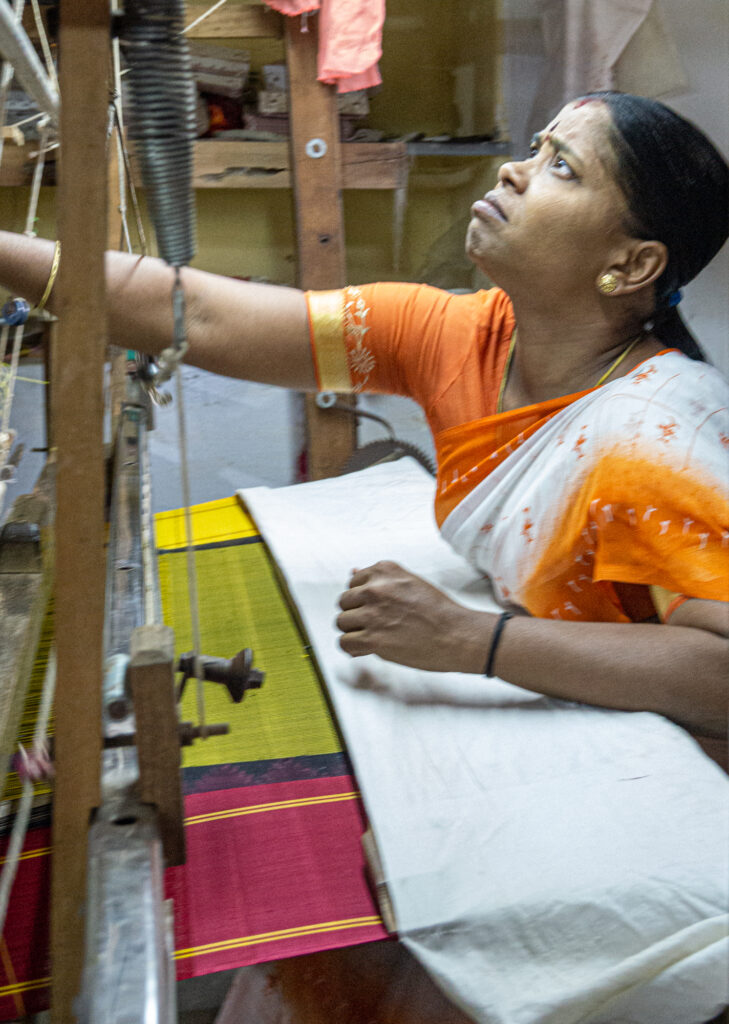 Here she was VERY grumpy when the Jacquard mechanism overhead malfunctioned!