Introduction:I learned to hemstitch very late in my weaving life and almost always forget to do it when I come to the end of a project and almost certainly when I begin one. Then I ask myself, “Why didn’t you hemstitch the ends?” I remembered for this project at the end of the first piece (a scarf) but at both the beginning AND end of the last piece (for a scroll). I got out my iPhone and put it on the warp as I followed the directions on my Kindle eBook: Hemstitching. It’s available on my website and Amazon. The price is right: $2.95. Otherwise, I probably wouldn’t have gotten up and looked in my beginner book. The iPhone sits on the warp so much easier than the big book does.

I have a needle case handy on my apron filled with a couple tapestry needles. Also, a latch hook which can come in handy is there, and a very useful pincushion that was a favor at a weaver’s conference years ago.

Here is the tapestry needle doing what it’s supposed to do. I’m hemstitching the end of a piece. At the beginning it’s a little different.

Here is how the tools look in my apron. Someone at a workshop asked what I used the emery board for. My answer was to file my nails.

This is my second apron and criss-crossing in the back is a good idea. Then the weight of apron isn’t on the back of my neck.

Students used to ask for a pattern. Here are the basic dimensions. Complete directions are in the Appendix in my book, Weaving for Beginners. 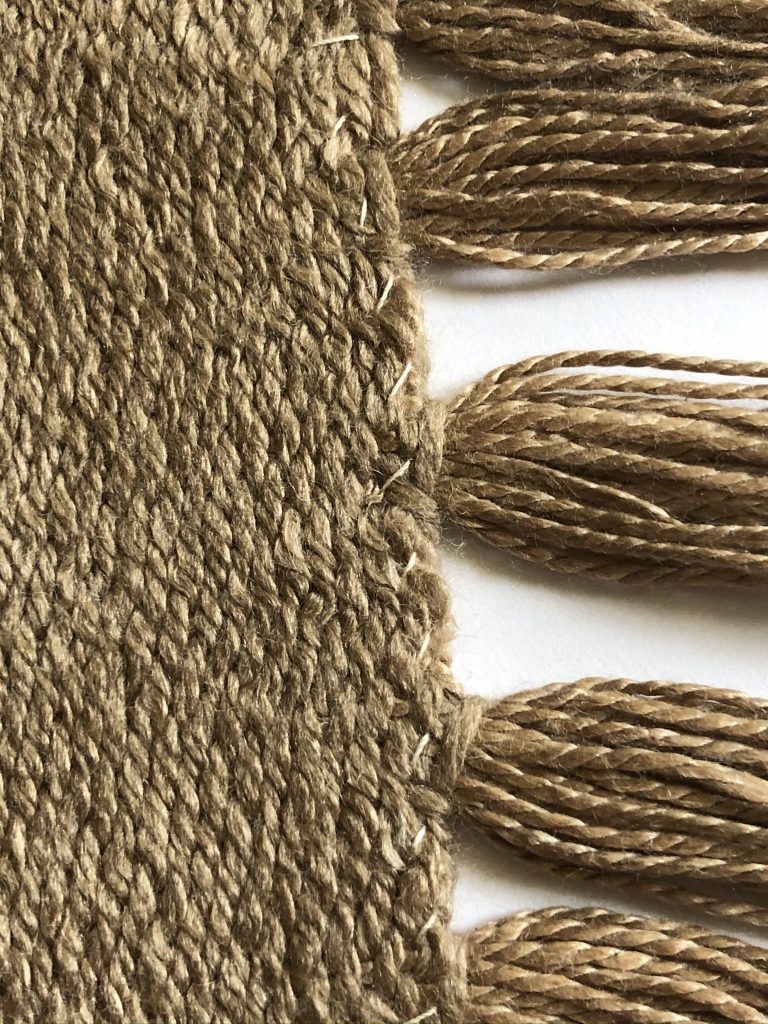 I needed to hemstitch the other day and had to get out my big book, Weaving for Beginners, which was so big that it made it impossible to do the stitching. So I got out my Mini iPad and opened up my Kindle book on hemstitching. Perfect–then I taught myself again how to make the stitches. I was all thumbs at first but when I got it, it was quick and easy.

Then I got out my iPhone and it worked better than ever. What fun! I learned to hemstitch way late in my weaving life so on one piece I even forgot to use it.

So, I got it! Since this will be on the hem on the back of the piece, I didn’t need to be careful about having every group of threads the same size. The reason here is to keep the last wefts from unravelling. You should leave at least an inch of warp on the piece before cutting it off the loom.

You can get a copy of my Kindle Hemstitching booklet for just $2.99 HERE.
Next month I’ll publish my third booklet. This one will be about a unique way of “Tying On New Warps”. FYI: the second booklet is “Weaver’s Knots“.

My first Kindle book “Peggy’s Weaving Tips – Hemstitching” can be purchased HERE for $2.99.

This is so exciting!