Introduction:
I received a comment today on my website about a tip I’d made about loom waste. I’m not sure what I was thinking, but not clearly, for sure. I hope it was done long ago. I will get my tech guy to delete the tip (when the lockdown is over?). In it I also showed the two-stick heading which is not about loom waste but about headings. It should not have been in that tip at all. Also, the illustrations and text didn’t match up.

A certain amount of your warp cannot be woven into cloth. It’s at each end. You must allow for it when deciding how long to make your warps. I remember a student long ago who wanted to make a baby blanket. We calculated how long the warp should be. Then she made the warp only as long as the finished blanket was going to be. She hadn’t understood why we’d done all the calculations for loom waste. The next week she came to class and reported on her ultrasound. Twins! And her first thought was that she could only make one blanket! I never saw her again! 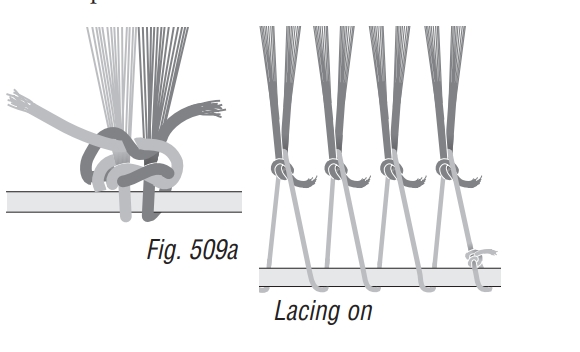 Front loom waste
The front loom waste is at the beginning of the warp. That is the place where some of the warp is used in tying it onto the cloth beam apron rod. See the illustration. Front loom waste might be anywhere from 6-8 inches to 20 inches long, depending on how thrifty or wasteful you are and on what method you use for tying on (knots or lacing on). Lacing on uses the least amount of warp. 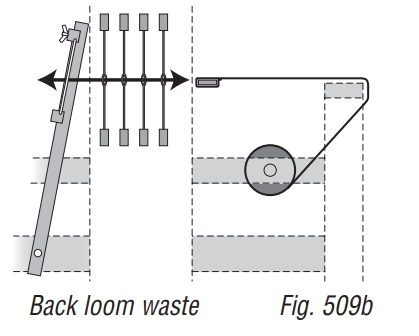 Back loom waste
The loom waste at the back of the loom can be seen in the illustration. It is the amount that cannot be woven because of the warp’s being threaded in the heddles on the shafts. Large looms have more distance between the beater and the back shaft, so they have more distance between the beater and the back shafts, so they naturally have more loom waste than a small loom would. To know how much to allow, see the illustration and measure on your loom the distance represented by the arrow. Pull the warp beam’s apron rod up to the heddles on the shaft furthest back on the loom. Measure from there to a few inches in front of the beater or about one-half the distance between the beater and the breast beam. Add a few more inches here if you warp front-to-back, for tying the knots on the warp beam’s apron rod, say, 4-6 inches more

3 thoughts on “Allowing for Loom Waste When Planning a Project”