Introduction:
I’ve been getting spam on Ahrenslooms.com lately. It’s a website I made with my apprentice, Vera Totos to explain how Ahrens looms work. Jim Ahrens was a mentor and his information is the basis for all my teaching and books. I have several looms, all of which he built. He is the “A” in AVL Looms. There is a little history on the website if interested. My tech guy decided that a new look would be good for the site while he was seeing what to do about the spam. He removed the Forum and Comments since no real person ever used it. In fact, one of the recent spams came from Russia he discovered! While he was fiddling with the site he came across the fairy tale and asked me what on earth was that. I replied it’s a story that explains the tension system on all the Ahrens looms and the AVLs as well. I could never understand how the brake worked so he told me this story and now I understand how the springs and ropes work. Now everyone can understand how the system works with confidence.

Once upon a time long, long ago before there were ratchets for looms, ways to tension the warp were very primitive. One day a weaver found a new way to put tension on the warp beam. He put a sturdy stick, like a peg, vertically in his warp
beam, hooked a rope on it, wound it around and around the beam, and hung a big rock on it. With the weight off the floor, he had full warp tension, and he was very pleased with himself. 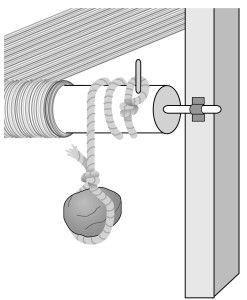 As he wove along and advanced the warp, the rope wound up on the beam and the rock rose higher and higher off
the ground. Pretty soon he had to stop because the rock was up on the warp beam, and he had to unwind the rope
to let it down. Then he wove along until the rock got too high, stopped to unwind some rope and let it down again. This worked fine and he was very, very pleased with himself 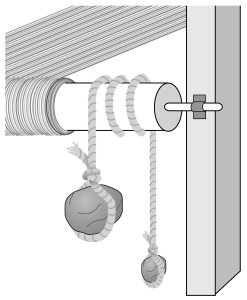 As he wove along, the big rock rose and the little rock fell until it hit the floor. Then the most amazing surprise came. When the warp threads were lifted to open the shed, the beam rolled forward slightly, raising the big rock and lowering the small rock to the floor. The little rock touching the floor took the tension off that end of the rope for an instant. As soon as it did, the rope slipped a bit on the beam. As soon as the beam slipped, the big rock put tension back on the rope pulling the small rock up off the floor again. The slippage let the warp move forward a few thousandths of an inch—just enough to compensate for the take-up of the warp for the weft! The big rock was off the floor, obviously, while the small rock dangled just above the floor, where it bounced and dangled on and off the floor as he wove along. Now he didn’t have to get up and unwind the rope to let the big rock down! He could weave along continuously, and the big rock would hold the full warp tension. The little rock would let the warp beam slip a bit with each weft and also would let it slip when he advanced the warp. The two rocks remained in these positions all during his weaving. This pleased him very, very, very much. When the shed closed, our weaver realized that the beam rolled backwards to its starting place. The tension on the warp threads never changed even when the warp threads were lifted to open the sheds, because the weight (the big rock) was always the same. This was perfect for fine silk warp threads that couldn’t stand the stress of stretching with the old locked beam systems. He was enormously pleased with himself! Rocks (with one rock ten times heavier than the other) and the weaver’s invention are still used today! 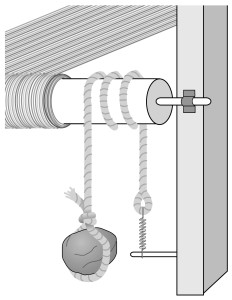 He came up with the idea on his own, but never claims to have invented it; her said, “I always found someone else had done the things I worked out on my own.” When he needed to make smaller looms, there wasn’t enough room for the big weight so he substituted a heavy spring for the weight “It was no big advance, there was no place for the weight.” he said. It works the same way as the weight and small spring. 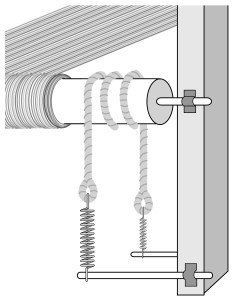 The heavy spring puts the tension on the warp; the small spring is the counterweight. When the shed opens, the warp beam rolls forward a bit loosening the tension on the other end of the rope at the small spring. The rope slips a little. The heavy spring takes over again, putting the rope back under tension. when the shed closes the warp beam rolls back to its starting point. The slippage is a few thousandths of an inch and the warp stays under constant tension.

As you crank the warp forward you exert more force on the warp than the force of the heavy spring causing the cord to slip. this allows the beam to turn and the warp to unwind.

Jim preferred using the combination of a heavy weight and the small spring because he can beat harder than with just the two springs. But the double springs are a good enough substitute if you don’t beat too hard.

4 thoughts on “A Fairy Tale”