Introduction:
Generally, the chain keeps most warp threads organized enough so that they don’t tangle. However, some yarns (for example, linen) can be quite “jumpy” or springy and tangle easily as can a large number of fine, silky threads. I recommend winding the warp on a kitestick instead of making it into a chain so that the threads are always on tension and thus, can’t tangle. In case of a large warp made in sections, you would have each section on its own kitestick rather than in several chains.

I’ve used the illustrations and text from my book, Weaving for Beginnerss. The trick is to hold the stick with your left hand, in the middle, where the warps are accumulating.  See Fig. 85. Your left hand should rotate the stick so you can easily wind above and below the lark’s head knot with your right hand. (Fig. 89) The motions are a lot like using a nitty noddy to make a skein. 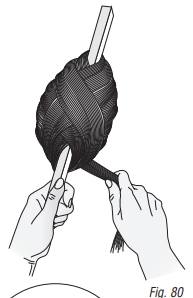 The warp will be wound on a stick in the same way a kitestick is wound. Use a stick approximately 1 ½” X ½” X 12” or longer. This is not a precise measurement. In a pinch, a ruler or a yard stick will do. It isn’t necessary to wind the stick precisely. The instructions look harder to follow than they really are. Winding on the stick is a lot like using a niddy noddy to wind a skein. Follow the instructions any way you can at first, and master the technique another time. What is important is that the warp is wound up onto a stick so the threads can’t tangle. 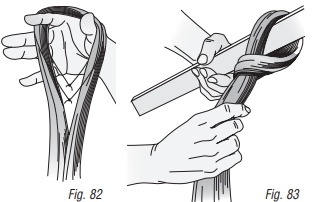 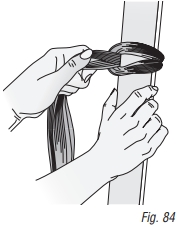 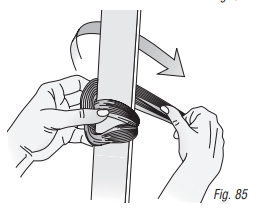 Take the warp with your right hand around behind the stick, as in Figure 85. 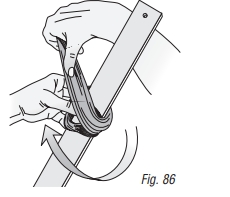 Then, take the yarn below the knot, and bring it up diagonally in front of the stick. See Figure 86. 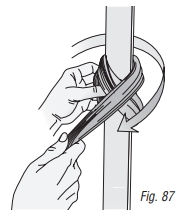 Now, take the warp to the front, diagonally downward, toward the bottom of the knot, making the other half of an X. See Figure 87. 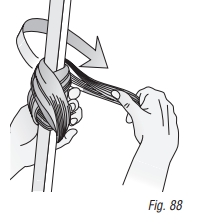 With your left hand, rotate the stick a quarter turn to the left, to the next facet of the stick. This direction keeps the warps tight. You’ll be turning your left hand until the palm faces you, as in Figure 88. Remember the trick: Hold the stick in the middle, where the warps are accumulating. 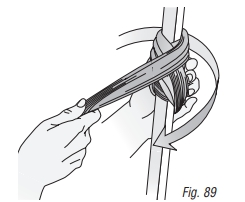 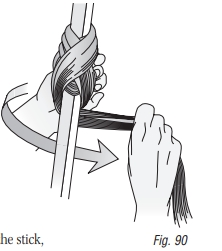 Continue this process (Figures 85-90) of making an X on a facet of the stick, turning the stick a quarter turn to the next fact, making an X, and so on. When the entire warp is wound, you can just lay the end of the warp on to of the bundle on the stick or tie it to the bundle if that seems more secure.