Knowing how to tie the weaver’s knot is very satisfying. I use it when I want a small, thin knot. I first learned it with the “ears” method but I see that I decided to just use the rabbit hole story in my book Weaving for Beginners. The next posts will have more details and how to make a double weaver’s knot.

The weaver’s knot’s characteristics–non-slip and a quick release–are valued not only by weavers but by climbers and sailors, too. The knot can be used whenever two cords are tied together or to fasten one cord to a loom part. Because it can’t be tied under tension, it is a good knot when measuring the warp when you have a slack thread to work with. It can be tied with short ends, but not with very slippery threads, such as silk. It’s slower to work than a square knot, but more secure and smaller. So if a square knot doesn’t hold, try a weaver’s or double weaver’s.

By remembering the following climber’s story, you can always remember this version of the weaver’s knot. Imagine a rabbit hole with a tree growing right behind it. Every day the rabbit jumps out of his nest, runs around the tree, and pops back into the hole. Think of the rabbit hole as a length of cord using the short tail end to form a loop. The “tree” (or tail of the cord) ends up behind the “hole” (loop).

Another cord follows the rabbit’s daily path. This cord comes up through the loop, runs around the cord tree, and pops back into the loop.

To tighten, pull equally on both standing ends in opposite directions. Release in the same way for all weaver’s knots. 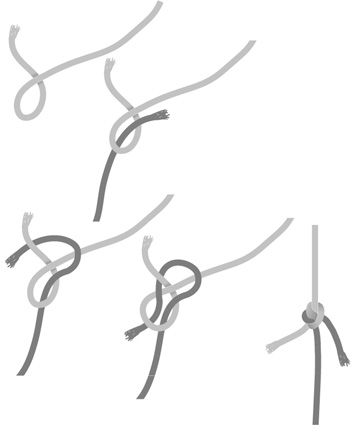 The key to knowing you’ve tied the weaver’s knot correctly is to be able to release or undo it. To undo it, you want to straighten out the thread that makes the “U”in the completed knot. No matter which way you tie it, there is one thread in a U-shape and the other thread winding itself around the first. Pull on both ends of that “U” thread-in opposite directions-to unbend it and straighten it out. The squiggly portion can be slipped right off, and even the squiggles relax so you have two fresh threads when you’re through. See figures below.

More information in Weaving for Beginners and Book #2: Warping Your Loom & Tying On New Warps

1 thought on “Weaver’s Knot: Make It using the Rabbit Hole Story: Part I of 3”