It’s been five years since I published my new website including over 100 weaving tips and I’m counting down the top ten. Here is number 5. This one has had 5723 views as of today!! The top one has almost 26,000 views to date!! Can you guess what the subject of that tip is?

Here is a comment about this tip describing in a real world situation how useful this tip can be: “Thank you so much. I have some 42/2 linen and it is going slow. Long story short, I signed up for a towel exchange due on Saturday. I have a couple woven and needed to cut them off so I can get them hemmed. This worked SOOO slick!! Thank you, thank you thank you!”

This is taken from my book, Weaving for Beginners, beginning on page 134.

The two-stick heading
This is a very useful heading. I have used it countless times. One reason is to
eliminate the knots on the apron rod so that the cloth rolls up without lumps
on the cloth beam. Another reason is so that you can cut off some of the cloth
before the whole warp has been completedly woven.
You need a pair of sticks that fit on your cloth beam and won’t interfere with
the ratchet.
They can be lease sticks, dowels, or metal rods. I prefer thin and lightweight
sticks rather than thick ones because they take up less warp and aren’t so bulky. 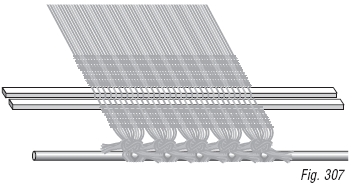 After you’ve woven the initial heading to spread out the warps (page 105) (or at least 1″), insert a stick in one plain weave shed; insert another stick
in the next plain weave shed, and continue weaving for 1″, or so. See Figure 307. The lease sticks will stay in place because they are woven in the cloth. 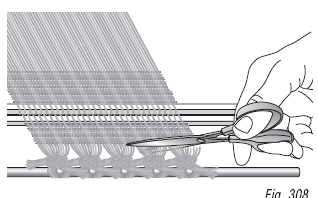 Release the tension on the warp, and carefully cut between the knots and the first inch of the heading that you wove. Leave both plain weave sections and the sticks attached to the loom!
Remember, you are cutting between the knots and the cloth which means only the knots are being cut off—the heading remains attached to the loom because it is part of the warp that is on the loom. Be careful not to cut the loom’s apron cords! See  Figure 308. (If you want fringe, see Figure 311).
The heading will be re-attached to the apron rod. See Figure 310. If the warp is sparse or slippery, put some white glue or tape on the cut edge to prevent the heading from unraveling or the warp threads from pulling the heading out when the warp is back on tension. 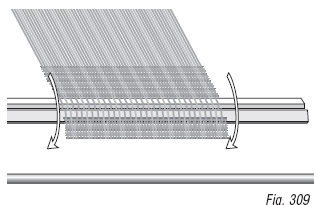 Tie the two folded sticks across the front apron rod at 3″ intervals. Make the ties
strong by doubling a sturdy but not fat string. Use a tapestry needle to go through the cloth and around the rod. Make the first tie in the center of the warp to hold the sticks stable. You might find it easier if you wind up the cloth apron until the apron rod is resting on the breast beam. Then pull the heading sticks (and the warp) forward to the apron rod and tie them to it, while steadying them on the breast beam. Put the knots on the front edge of the apron rod so you won’t make lumps with the ties. See Figure 310.
Begin weaving again. The warp tension remains unchanged; since the heading
sticks were woven in with the warp on tension before the knots were cut off, all
the threads remain evenly tensioned as you resume.
FRINGE
If you want fringe, untie the knots instead of cutting them off and fold the
sticks as above. Then smoothly fold back the unknotted warp threads as well as
the heading. 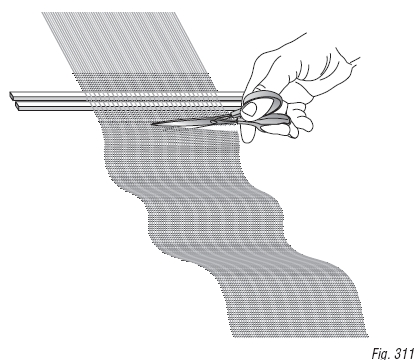 Cutting Off As You Go

Another situation: Cutting off the cloth as you go
You can cut off pieces as you weave them; it’s not necessary to wait until the
entire warp is used up before cutting off the fabric. The headings and two sticks
save precious warp because you don’t need to tie the warps back on to the
apron rod.
When you’re ready to cut off a length of cloth, make the complete 2-stick
heading just as above. (Weave 1″ of plain weave, insert 2 sticks into the next
two plain weave sheds, and weave one inch more. That’s the complete heading.
You do not leave any space between the cloth and the heading—you’ll just cut
the cloth and heading apart.
Cut between the cloth and the first inch of the heading you wove, leaving the
complete heading attached to the loom. See Figure 311. Remove the cloth from
the front apron rod. Fold the two sticks, and tie them to the apron rod, as above.

3 thoughts on “Counting Down My Top Ten Weaving Tips – #5: How to Use the Two-Stick Heading”

Another arty and noisy flower past it’s prime.

I think this looks like a 3-headed pelican with 4

This pelican had to scratch. It’s amazing how th

Went to see the white pelicans today. I wonder how

Fishing under the freeway. Men and great blue hero