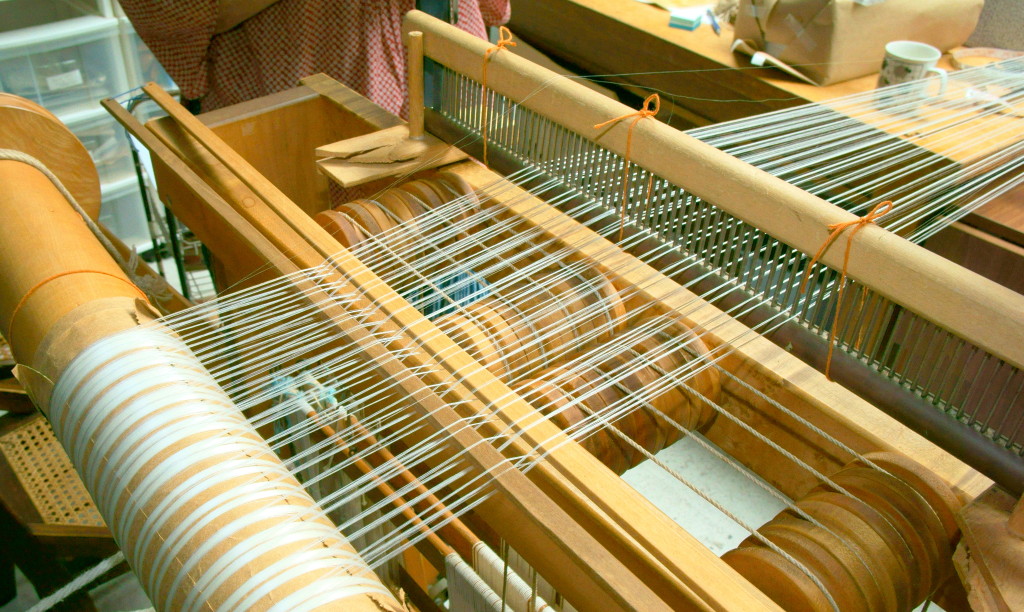 I have been fascinated with stiff silk—raw silk—undegummed silk for a few years. These threads and fabrics are not silky but crisp. Silk organza is an example. On a trip to Japan with Yoshiko Wada we found a few skeins of it and I grabbed them. They were lovely in the skeins and I didn’t notice how very, very fine the individual threads were! When I tried to wind the threads from a skein onto a spool it was a nightmare: threads broke, I couldn’t find an end etc., etc. I asked Takako Ueki, owner of Habu Textiles in New York, how to wind off fine threads and she said she would do it in her store, when I got a skein back it was on about 10 cones—I guess she kept starting over and over when threads broke. (It was expensive.)

I wound my previous warps with 10 spools at a time so I thought I would with this fine stuff, too. Snags, broken threads, cones messed up—all kinds of problems. So I tried 6 and finally ended up with 4 good cones and made a 10-yard warp. I have a wonderful warping reel with a heck block and leaser so winding with multiple threads is efficient. I tied many, many choke ties before I took the warp off the reel—turned out unnecessary for these threads but critical for the previous warps with the threads that collapsed. I decided I had to recalculate the sett because the threads were so fragile and fine so I went from 96 threads per inch to 120. 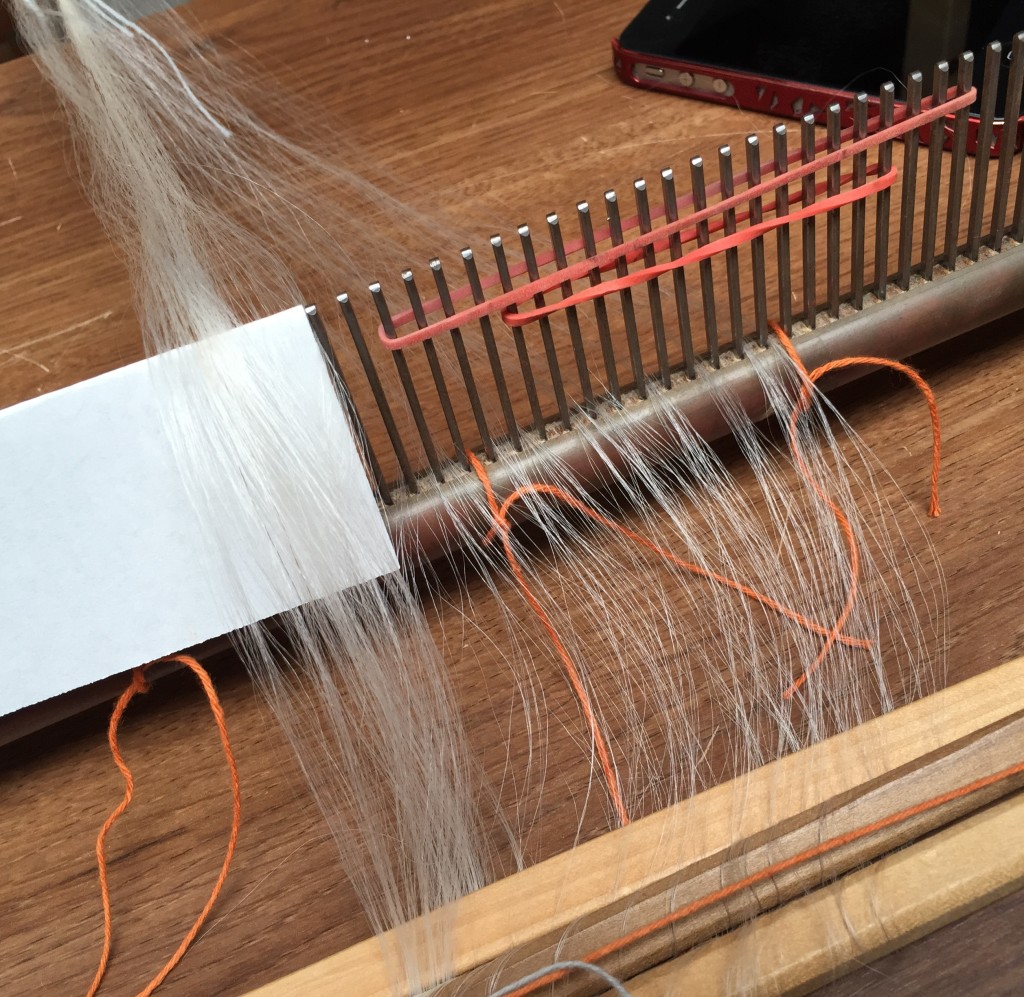 This first photo shows me loading my 5-dent raddle with 24 ends per dent. I skipped a space after every 2 dents to widen the warp and with more threads in a dent they worked together so that they did not break. For the 24 threads I used 2 raddle groups, each with 12 ends. [be sure to click the photos to see the fine details] 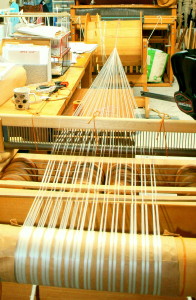 I use a warping drum to hold the warp on tension while I beam. I clamped the raddle onto the loom and left the lease sticks in to keep the threads organized and in order in their groups of 24 threads. 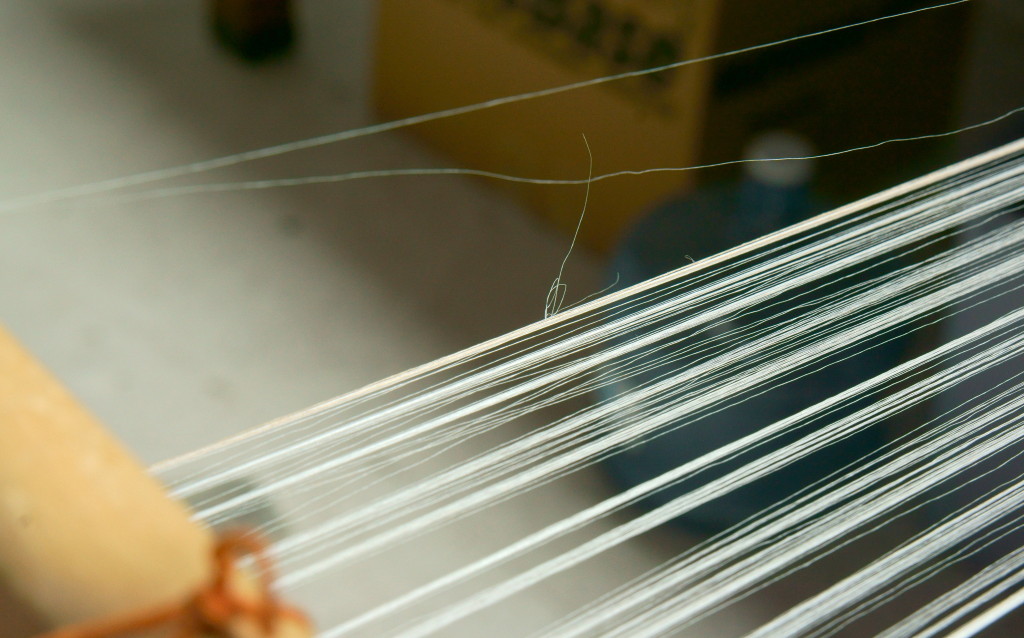 One photo shows a few errant threads but all in all the threads did fine under the tension of the warping drum while winding it onto the warp beam on the loom. The first group of threads was the one where I tried 10 and then 6 cones and had the breakage, etc. I will discard that group I’m thinking—that snarled errant thread shows you why.

The drum is across the room in my studio—maybe 15 feet away from the loom. I have to push a lot of stuff out of the way in the studio to make room for the beaming process. I stand at the loom and turn the warp beam roller and that pulls the warp off the drum under a lot of tension. The warp looks really great on the beam—tight and orderly.

The final step in this part of my saga is at the end of the warp as it came off the drum. 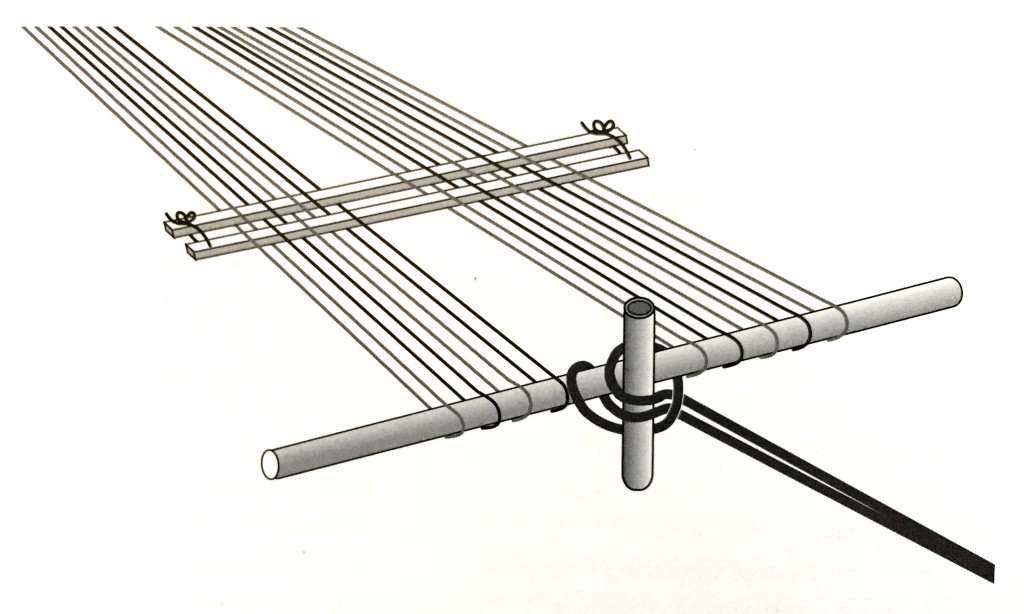 This illustration is from Page 148 in the chapter: The Warping Drum in my Book #2, Warping Your Loom & Tying On New Warps which is now available again in PDF format. The rope to the drum is attached to the end stick which I put in the end of the warp and the lease sticks are in place—for the tread-by-thread cross. This I did today. Now the remaining part of the warp can be beamed and ready for threading the heddles. I think it will take a couple of weeks for that step—there are around 600 threads and sometimes I can’t even see them—just feel them. Wish me luck.

6 thoughts on “A Fine-Silk-Thread Saga: Part One”