Here are pictures of the threading. Every fine silk thread must go in order into its own eye of a heddle. The heddles are made of string which I tied years ago. Setting up the loom this way (back-to-front) allows me to separate the heddles so I can see them to thread them easily. There is a supplementary warp: grey cotton sewing thread on its own little kietstick. The silk threads are threaded in the heddles on the 4 shafts of the loom. The supplementary warp is threaded between every 8th heddle–those threads don’t go through eyes but between the heddles.

The threads are kept in order on sticks called lease sticks. Look closely and you can see that the threads alternate going over and under the sticks. That way it is obvious which thread is the next one to thread into the next heddle. There are 2 pairs of lease sticks–one above holds the grey threads in order and the one below and to the right holds the silk ones.

The last picture show me beginning to thread all the threads into the reed. There are 8 silks and 1 grey in each space of this comb-like part of the loom. That keeps the threads as close together as needed. It is in the “beater” which pushes the weft threads into place during weaving. I am almost there. I began setting up the loom on June 15–maybe 3 weeks ago.   [click first photo for slideshow] 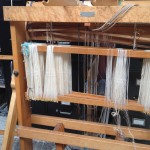 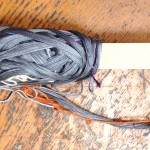 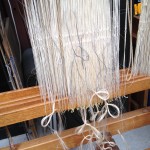 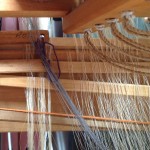 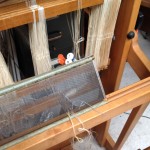 1 thought on “Threading the New Warp”