Finally I got to my studio and made a warp this week. Another 10-yard one with the fine silk threads I used for the bookmarks, rullfes, and other sheer pieces. Here ae some details and the equipment I need for this fine and kinky thread. It kinks horribly if off tension a second. I warped with 10 spools on the reel that Jim Ahrens built and used. There is also a heck block which makes the path on the reel and makes the cross with two tiny shafts (called the leaser).

Because the thread kinks so much I had to use a creel that holds the spools horizontally. I had this built by a friend. I discovered to keep the threads in order and on tension from the creel to the reel I needed several lease sticks. That way if a thread broke, I could find it, too. I clamp the stick onto two boards coming out of the creel.

The heck block rides up and down on the two poles, attached to the floor and the ceiling.

By the way, the colors are fugitive–as soon as they are on the reel they all are the honey color with a tiny tinge of the original colors.

You can see the drum waiting beside the reel. That’s the next order in the process.
[click on first photo for slide show] 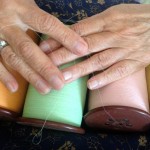 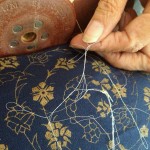 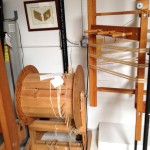 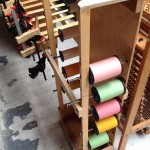 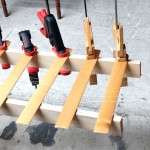 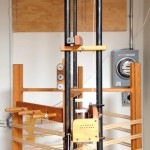 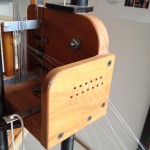