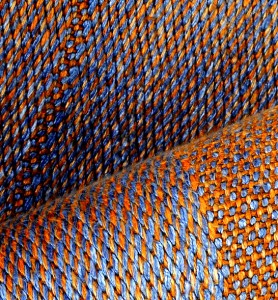 A few weeks ago our guild had a speaker who explained the theory of optical mixing. When I got home, I noticed I’d been doing that without knowing it for a long time. I kept finding pieces that were examples of taking two colors and mixing them to form a third color. I was excited to see several examples so decided to do a study group after our next meeting to discuss optical mixing and show some examples.

I’m also going to talk a bit about using complementary colors. The table runner is woven of oranges and blues. 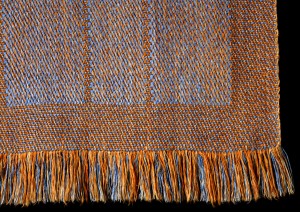 There is so much to learn about color theory that I get overwhelmed easily and not much sticks in my brain so I just want to talk about these two subjects.

This runner I wove for my mother-in-law but I knew she wouldn’t appreciate it so I never gave it to her. It’s one of my very favorite pieces. The linen fabric is thick because I put together the two warps from a previous double weave project into a single layer. 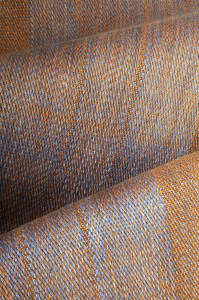 I ironed it hard with a rolling pin on a bread board while it was damp. I love the weight, the sheen, and the subtle colors.

The idea of putting two warps together as a single layer happened when I was sampling for making some table runners. I ran out of color combinations to try, so just wove the warps together for a warp face structure where the warp was completely hidden. It still made a thick cloth which I wanted and I loved the way the two warp colors mixed.

1 thought on “Optical Mixing in a Woven Table Runner”