Things to know before you throw a shuttle:
Important Information About How to throw the shuttle 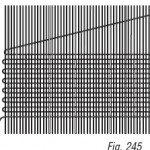 Beginning weavers learn about the diagonal of the weft but they think they should have the weft loose at the selvedges. In my book, Weaving for Beginners, I tell how to snug up the weft for good selvedges and no draw-in problems.

Throw the shuttle into the correct open shed. Take out the shuttle so the weft is in the shed on a diagonal as shown in Figure 245. Holding onto the shuttle, snug up the weft to the outside warp thread—the side where the shuttle entered the shed—just so it touches and barely moves that outside thread. Then, swing the beater and gently place the weft next to the previously woven weft. You do not want to actually beat it as the name implies. You are simply placing the weft against the one woven before it. Now, while the beater is toward you after placing the weft, change the shed. Then, swing the beater back toward the heddles and begin the process again. The steps
are: throw the shuttle, beat in the weft, and change the shed. I like the rhythm of saying:     “Throw, beat, change the shed.” That’s 4 counts, with “the shed” as one
beat. (On the fourth beat you’re pushing the beater back toward the shafts.)