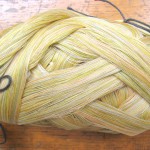 Here is my new warp–sewing thread–for some art pieces. More ruffles, probably. You can see the 10 spools that I used on my warping reel with a heck block. Otherwise, for 10 spools you would definitely need to use a paddle (which is a good idea). See my book, Winding a Warp & Using a Paddle). The warp is on its kitestick, ready to load the raddle. 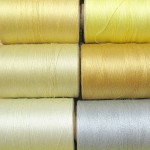 I’m using sewing thread and hoping for sheer again. I increased the sett a bit from the yellow warp so I won’t have to beat so gently to get the wefts not to pack in too much.
I’m making separate selvedges out of white rayon and using a supplementary warp (egg plant color) for the punch. The technique for the supplementary warp I’ll use is split broche. The threads will not be in the heddles as they are threaded amongst the warp threads which on are 4 shafts. More on this when I get started.  For now, you can see those threads on their own small kitestick.
I think I’ll put in some horse hair–I love the color of it.

2 thoughts on “My New Warp”